Canopy Growth Corp. (formerly Tweed Marijuana Inc), a Canadian company, was founded in 2013 by Bruce Linton, and today it is the biggest cannabis producer in the world. It also was the pioneer cannabis producer to be the first publicly traded company the USA, listed and traded on the New York Stock Exchange (NYSE) as CGC and on the Toronto Stock Exchange (TSX) as WEED.

At this point, Canopy Growth is arguably the best-performing marijuana stock with the highest market cap claimed among marijuana stocks. The stock, on an annual compound basis, generated an astounding 1,460% return since its 2014 IPO. 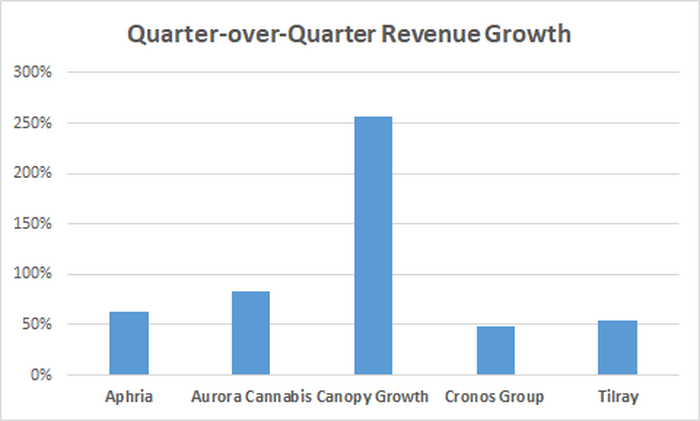 After Canada has legalized the recreational cannabis at the beginning of Q4 2018, Canopy Growth ended up the year being by far the top seller among its main rivals, the biggest Canadian cannabis producers Cronos Group, Aurora Cannabis, and Tilray. During the last three months of 2018, total revenue of Canopy Growth Corp. rose 256% from the previous quarter to CA$83.0 million, after accounting for the new 10% excise tax.

Right after the passage of the US Farm Bill in December 2018, in January 2019, the Canopy Growth (NYSE: CGC) announced that it would invest up to US$150 million in hemp operations in New York state. This legislation legalized hemp in the US, defining hemp as cannabis that contains very low levels of psychoactive compound THC. Hemp is sometimes referred to as the marijuana “cousin”, which has negligible-to-zero psychoactive effect and is used for medical as well as industrial production, including paper, textiles, clothing, biodegradable plastics, paint, insulation, biofuel, food, and animal feed.

The company has obtained a license to process and produce hemp in New York and is now building a Hemp Industrial Park with large-scale production capabilities that can produce “tons of hemp extract on an annual basis,” according to the company. Cannabis market research company Brightfield Group projects that U.S. hemp-based CBD product sales could reach $22 billion by 2022.

Another huge strategic and market advantage that Canopy Growth has is the company’s recent deal with the major alcoholic beverage company Constellation Brands, the owner of such brands as Corona, Modelo Especial, Funky Buddha and other beer, wine, and spirits brands. Canopy Growth received a $4 billion investment from the beverage company valuing the company at US$12 billion post-investment. he partners announced a plan of producing and distributing cannabis-infused beverages into the market.

Benefits of the CFD investments

CFD trading enables you to take advantage of the price fluctuations of financial instruments such as public stocks, indices, ETFs and others. In other words, the investor enters a contractual agreement with the CFD broker to exchange the cash difference in price between the opening and closing prices of the contract. The main difference between CFD trading and share trading is when you trade a CFD, you don’t need to buy the underlying share, but can still benefit if the market moves in your favor.

Leveraged Trading. With CFD being a leveraged product, you only need to deposit a small percentage of the full value of the trade in order to open a position, since you don’t actually own the asset or instrument you have chosen to trade. This allows traders to open larger positions than their capital would otherwise allow. In Cannabis stocks the maximum leverage is usually in the range of 5% to 20% of the actual stock full price.

Diversified Risks. Bioscience companies in general, and Cannabis companies specifically, represent a volatile sector, and as such are high-risk investments, mainly due to legal status. By trading an index versus owning a stock itself,  you can:

Many major traders have recently added cannabis stocks CFDs in their offerings, and Top 10 CFD Brokers expert team is happy to present you the analysis.

The Canopy Growth (NYSE:CGC) CFD openings are available for purchase and trade with:

Trade Canopy Growth Stock With Plus500

Benefits of CFD trading with Plus500:

Trade Canopy Growth CFD With Plus500